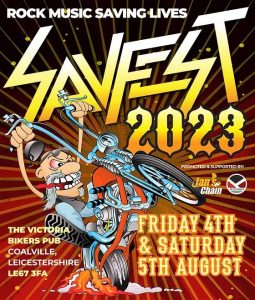 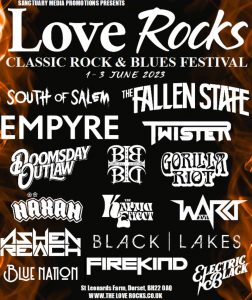 This May the inmates of Ward XVI will be expanding their practice into performing a Proctoscopy to the Devil’s A*se.

This promises to be one of the most insane gigs we’ve ever played deep in the caves of the Peak Cavern – “The Devil’s Arse” at Ghost Con UK, with Popestars – A Tribute to Ghost.

This will definitely be one not to miss. 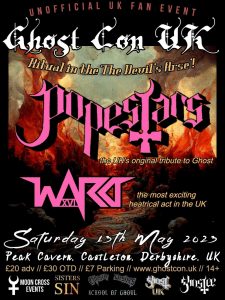 The inmate’s first release of 2023 will be at Pentre Fest where Psychoberrie will be bringing blood, theatrics and horror to the Friday night headline spot.
Joining Ward XVI will be Saturday headliners The Kunts, King Kraken, Pelugion, Thrashatouille, Portrayal Of Ruinn, Apollyon, Lullaby for a Unicorn, and a tonne more bands who’ll be making the weekend one not to be missed.
Get your tickets now and join the Pentrefest circus pit. 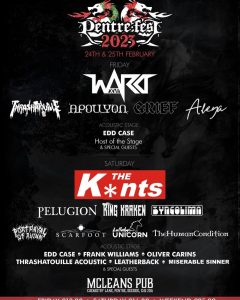 The last tickets are now released and live on the system (which include the very last Royalty & VIP) to book right now, we are all now boarding, so get involved for this monumental milestone in the world of Rock n Roll. 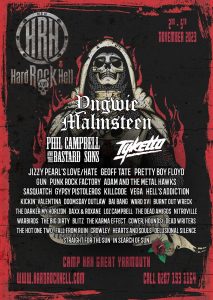 Oxford, are you ready? Rabidfest will RETURN to The Bullingdon on 4 & 5 November for our FIFTH year anniversary. And we’re not pulling any punches.

We’re once again thrilled to announce the first bands set to play the Devolution Stage at Rabidfest 2023.

The gates have been cast open. Theatrical metallers Ward XVI bring their critically acclaimed set to Oxford. Step into the criminal mind of Psychoberrie, as hard-hitting riffs and vocals tell the latest tales from the inside the ward.
We welcome one of Bristol’s finest metal exports MORTISHEAD to their debut set at Rabidfest 2023. The six-piece industrial thrashers have been smashing stages since 2014, and we eagerly await what’s sure to be a face-ripping set.
Intimately powerful. Simply awe-inspiring. Tribe Of Ghosts have made waves over 2022 with a deeply atmospheric take on industrial alt-metal. Certainly, the 4-piece Brighton outfit are a must experience act at Rabidfest 2023.
On the heels of the killer release ‘To Be Alive’, we’re excited to welcome back Rabidfest alumni GUTLOCKER to the Devolution Stage in November. Woking’s-own 4-piece metallers prove that standing still is not an option during their fiercely unique sets, so bring your dancing shoes.
Pure head-banging satisfaction. Blistering riffs and grooves make up the energy behind SW London’s IMPERIUM,, and we can’t wait for them to smash the Devolution Stage at Rabidfest 2023.
A perfect blend of melody and brutality. 2022 saw the release of blistering singles ‘Nemesis’ and ‘The Swan and the Serpent’, and tech-metallers From Her Ashes will look to carry that momentum to Rabidfest 2023 this November.
From the cold heart of the UK emerge dark symphonic metallers Draconian Reign. We can’t wait to bear witness for this eagerly anticipated set.
Customary for all Rabidfest events, proceeds will be donated to our chosen annual charity. We’re delighted to announce that the charity for Rabidfest 2023 will be the amazing The Sophie Lancaster Foundation. S.O.P.H.I.E is a crucial member of metal and alt communities known across the world, and we’re proud to contribute to the fantastic work the foundation continues to do.
Rabidfest 2023 will not be possible without the support and endorsements of our partners at Devolution Magazine, Red Death Media, Moomin Merchandise, Metalplanetmusic, Moshville Times, MetalNoise.net, GraphicsFix and Unearthed Music.
More bands, including headliners, to be announced in the coming weeks. Tickets will be available soon, so make sure to watch this space for any and all updates. 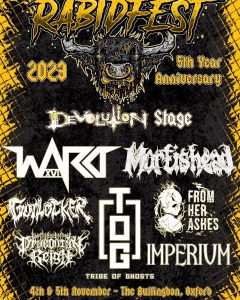 🔥🔥SOS Festival 2023🔥🔥 The inmates of Ward XVI are finally returning… this time with a real chainsaw rather than a card one Headlining the Saturday night at Whittles Oldham next year. Early bird weekend tickets are on sale NOW for an insane price, were along with us will be the crazily amazing South Of Salem 🦇, Gorilla Riot, Twister, Circus 66, Loz Campbell, Thieves Of Liberty and so much more… and that’s just the beginning, as more bands are to be added. So get your blackened hearts to the website on the poster and grab some while you can. You’d be insane not too 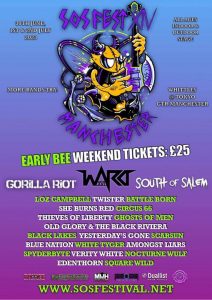 The inmates are excited to tell you that we will be bringing our madness to Winter Rocks Festival this December.
We’ll be joining our good friends South Of Salem on the Friday night, in which promises to be a great way to kick start an insane weekend.
#wardxvi #winterrocks 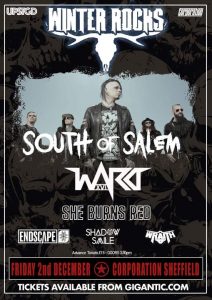