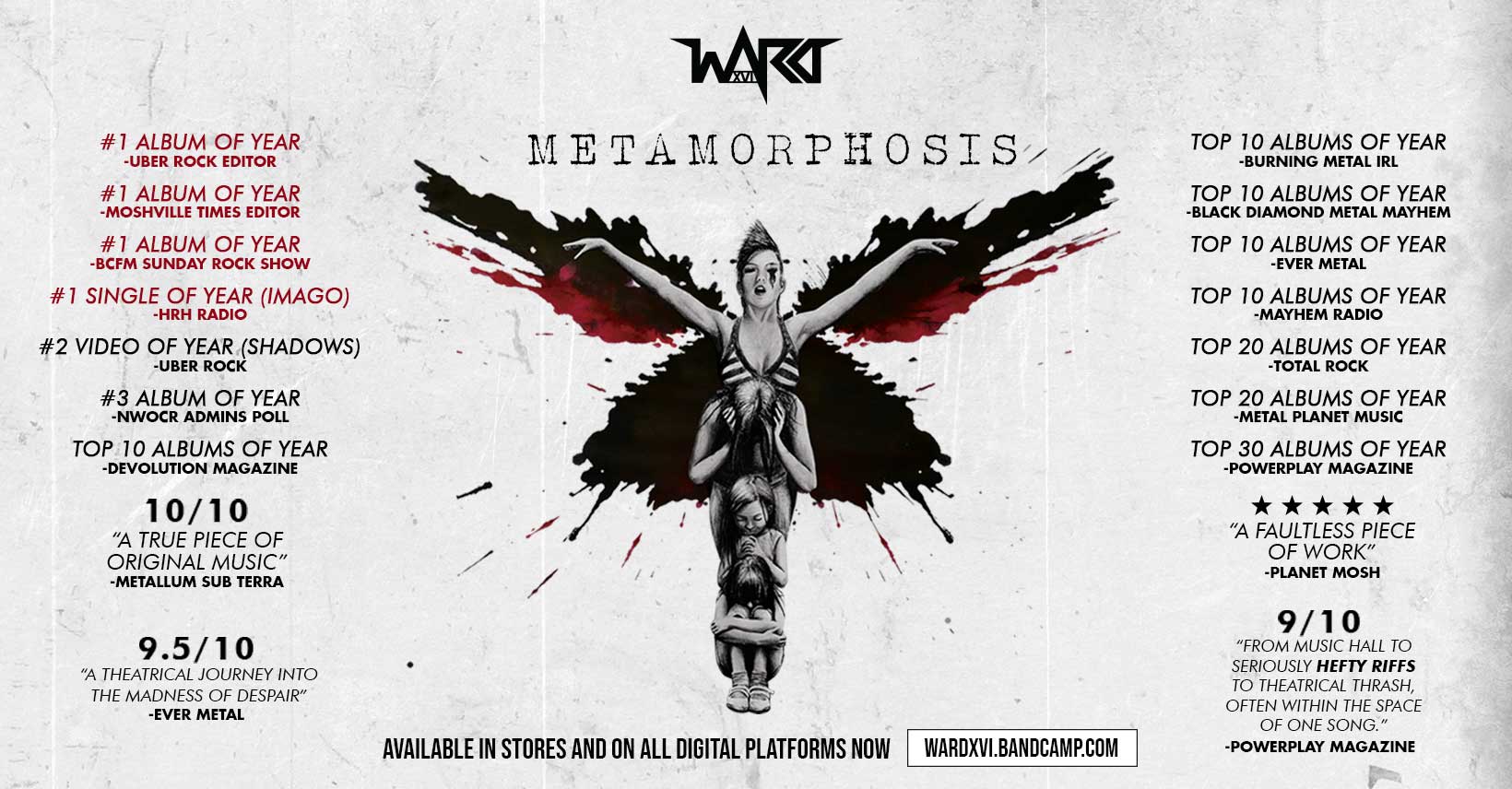 “From to music hall to seriously hefty riffs to theatrical thrash, often within the space of one song.”  9/10 – Power Play Magazine

“‘Metamorphosis’ really is a great album and a true piece of original music. I have never heard anything like this before so my final score of the album is an easy decision as a lot of work has clearly gone in to this album and if bands keep putting this much work in to their music I believe the scene that we all live for will thrive again.” 10/10 – Metallum Sub Terra

“If you like to be taken on a theatrical journey into the madness of despair, in the style of Alice Cooper or Avatar, then Ward XVI, and this new album, are for you. It brings another level of depth and depravity to their ‘Shock Rock’ style, both musically and production wise, it’s masterfully handled. The instrumentation is ingenious, mixing ska style off beats and classic rock riffs. The use of sound effects, as well as spoken word, and some operatic and harsh vocals, add to the drama, darkness and madness throughout. Lyrically this disturbing concept album creates a deep and sorrowful picture, that draws you in from the very start. Terrifyingly beautiful, or beautifully terrifying? I’ll let you decide.” 9.5/10 – Ever Metal

“This over the top album ends with the mind-blowing ‘Shadows’. It has the pomp and majesty of A Night At The Proms performance. It’s an all-consuming black hole to finish off a faultless piece of work.” HRH Mag

“The storytelling is massively helped by a clear and emotional vocal delivery and an absolutely cracking quality of production. This sounds like a band really heading somewhere and I for one want more.” 9/10 – Musipedia of Metal

“You can probably tell that I’m utterly sold on this release. I love it, absolutely love it. It blows holes in what I was expecting. I avoided listening to any of the tracks until I had a chance to hear the whole thing in one sitting and I’m really glad I did so. Ward XVI should be hugely proud of this release and it deserves to absolutely kick them into the spotlight. Bravo!” Moshville Times

“Over the years there have been many concept albums and two that come to mind which have characters shall we say that are not of the norm, is Nikki on Queensryche’s Mind Crime, and Pink from the Wall, I have no doubt that in years to come Ward XVI’s Psychoberrie will become as legendary as these guys.” We Bleed Music Media

“Musically they merge rock and metal with prog and demented circus-type music whilst telling a story which in places reminded me in part of Welcome To My Nightmare by Alice Cooper, Scenes From A Memory from Dream Theater and The Wall by Pink Floyd along with a dash of The Musical Box by Genesis. They really do put everything into what they do” CGCM Podcast

“‘is it as exciting as the ‘synopsis’ promises to be? Yes, and bloody yes!” ghlbl.com

“Artists are under constant pressure to deliver originality and increasingly that extends outside of the music solely. While many tinker around the edges tippy toeing back and forth Ward XVI have simply jumped off the high board into something that is fully immersive and rather disturbing … Metamorphosis rocks as an album and as part of the whole Ward XVI concept. Nightmares have never sounded so good.” Devolution Magazine

Album (The Art of Manipulation)

“The Art of Manipulation “is a 12-Track concept album telling the introspective story of a female psychopath locked away in a high security asylum. Throughout the album she delves into her past life and tells the story of how she manipulated a man into killing for her using her feminine charm; however when the guilt became too much for him to bear this charm transformed into something much more sinister. “Driven by a barrage of drums that thrash about like a patient trying to free themselves from a straight-jacket. For those who buy into the concept, you will be rewarded with music that mirrors it.” Power Play Magazine

“Sixteen tracks of pure madness and bedlam. Definitely bringing something different to the table and setting them apart from other bands.” www.invictamag.com

“get ready for a trip to paranoia. Get ready to dive into colourful melodies. Don’t be afraid, you will be rewarded for such bravery -5.5/6” www.metalinvader.net

“From start to finish The Art Of Manipulation will have the audience begging for more, I know it’s certainly left me with an appetite for more tales from the incredible Ward XVI”. Planet mosh

“When writing this review, I think what is perhaps being overlooked a little is the strength of the actual music, song writing and inventiveness of the band as a whole. This is an extremely talented band that are able to take you on a journey and create those moods song by song. This is the hidden secret to Ward XVI and the reason why the theatre, the image and their stories are allowed to breathe so well. It’s simple, really – Ward XVI are a damn fine band in their own right”. The Moshville times

“The album closes with the track Ward XVI, its own and its inmate’s destination reached. An initial keys crafted gentle start deceives; its suggestion of contrition and realisation soon consumed by the raging blaze of sound and intensity which erupts as the release burns its final success into the senses and imagination. It is a fine end to an encounter which offers a little more with every listen; a striking affair from a band we for one are already hungrily waiting to hear more from. The Art of Manipulation is a must for the bold, musically adventurous, and yes slightly deranged”. Ringmaster reviews

“The melodies and hooks are strong throughout, meaning each track has the ability to stand on its own merit without detracting from its cog-like place in the overall story wheel. The performances are very good and Psychoberrie can shift between contrasting vocal styles seemingly with ease. The melancholic ‘Hold Me’ does not seem out of place next to the more caustic ‘Run for Your Lives’ and highlights the bands imaginative writing mantra. The occasional use of accordion and Wurlitzer generates an uneasy carnival mood at times and strengthens the theatrical elements of ‘The Art of Manipulation’ mentioned earlier”. Fireworks magazine

“Saturday at Bloodstock was looking to be a brilliant day. Headlining their first UK festival was the mighty Ghost, with all manner talent coming underneath. I was expecting to have a fantastic day. What I was not expecting was to see a disembowelling, a chainsaw attack and a bassist have his throat slit, all before 11AM, however that is exactly what I received from Ward XVI. The horror themed rockers tore apart the New Blood Stage shaking off everyone’s hangovers. The songs are fast paced, catchy and all the more entertaining drenched in horror. Also, to see an entire tent form what Ward XVI call a “circus pit” added even more entertainment to the already brilliant set. Without a doubt, one of the most surprising and talented acts to play Bloodstock this year. I can’t recommend them enough”. Midlands Metalheads

“For anyone who is a fan of crazies from the asylum then this band is straight up your street. Donning their asylum attire, these Preston-based misfits look like they should be committed for heinous crimes, when in actual fact their stage performance packs out the room and gathers everyone together for the biggest circle pit of the day. Their energetic theatrical live show present hard-hitting riffs, insane vocals, and ferocious dynamics. From chainsaws to butchers’ cleavers, this act has everything”. Uber rock

“Ward XVI were next up on Stage and easily had the biggest crowd of the weekend in the room. With the room bursting at the seams and people forming large queues to enter, their superb performance proved to be an instant hit with some of largest cheers coming from the room that weekend.” Moshville times

“This band could easily make a bigger production out of this; they bring something new to each performance and they just get better each time”. Down the Front media